Have you ever thought about running the New York City Marathon? Karen Byrne did, but she did not stop at thinking about it: she actually ran and completed the race this year.

As you may know: One does not simply show up to run a marathon. It takes meticulous planning and lots of training. While running is an individual sport, it makes it easier to have a dedicated support group that helps with motivation and guidance. Karen found just that in Achilles NJ, which is a chapter of Achilles International, whose mission is to “break down barriers to race start lines and empower the disability community to cross the finish line.”

Karen and her guide, Melanie Tortora, formally met in 2017 at Saddle River County Park, where they both were running for North Jersey Masters. At the end of that day, Karen told Melanie that they would be great friends for life. Shortly thereafter they started running together at a training run for Achilles NJ. That was the beginning of countless runs as athlete / guide together. Training and competing with Karen wasn’t Melanie’s first experience with a person with an Intellectual Disability, as she had an uncle with Down Syndrome. But getting to know Karen “would change my life forever”.

The US flag bandana is one of Karen Byrne’s distinguishing marks, and she always wears it when running. This is her way of paying tribute to her late father, who served in the army. He also was a runner and a boxer, and that is probably from whom Karen received her athletic abilities. She dedicates her races to her deceased parents and brothers.

When not running, Karen helps her sister, who also lives in Bergen county, with her dogs for Operation K9 Beethoven. This organization helps Veterans and First Responders with PTSD by offering emotional support dogs for free. Karen usually starts her work day with feeding and letting the dogs out. To no one’s surprise Karen runs around with the dogs, too. During downtimes she works on her life skills, such as doing laundry, cleaning, and cooking.

Karen is competitive and celebrates her victories, but she never forgets to be grateful. While picking up her race bib and participant shirt she takes her time to thank volunteers for doing what they do. Her friendly nature and attentive mind makes everybody in the room feel respected, and like winners. But when she receives a compliment she usually politely answers “I don’t know what to say, but thank you”. 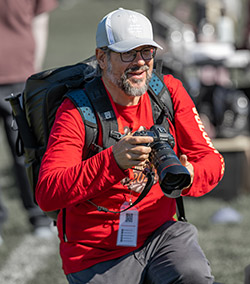 Notes from the author: Over the years I have seen Karen compete both at Summer and Winter Games, and on several occasions we chatted on the sidelines. During the last few months, as we met at events and communicated through various social media channels, she struck me as grateful and kind. On several occasions she mentioned that she didn’t run for herself, and always thanked me for what I was doing for her specifically, and for Special Olympics in general. As a former recreational long distance runner myself, I understand what it takes to prepare for and participate in a marathon. This year’s conditions were not ideal for running the NYC Marathon: unseasonably high temperatures and humidity made it really hard for all participants. I may or may not have complained about it, but Karen, in true form, never made a mention of it, unless prompted by me. Thank you Karen for having let me be part of your great journey.

7 comments on “Faces of SONJ: A Marathon of a Journey”