In 2007, five friends came together for RunAPalooza to support Special Olympics NJ. Eleven years later, that group of five friends has transformed into a team of over 100 members who have raised nearly $70,000, and they are proud to call themselves Kev & D’s Crew.

Kev is the son of Cheryl Donlon, an active member of the Special Olympics New Jersey community, who has coached bowling and a local track and field program. Cheryl started what was then just Kev’s Crew with her close family friend Joe Eskenazi, whose daughters grew up babysitting Kev. Three years ago, Kev’s Crew was renamed to Kev & D’s Crew after Joe’s oldest daughter Jackie had a son named Dominic. Dominic and Kev both have Down Syndrome and are the two who inspire the team to continue running at RunAPalooza each year.

RunAPalooza is an event that takes place annually in Asbury Park and is comprised of three separate races: The Jersey Shore Relay Marathon, the Asbury Park Half Marathon and the Jersey Shore 5K. Together, they benefit Special Olympics New Jersey and the Jersey Shore Dream Center. Over the last eleven years, Cheryl has built a strong relationship with the organizers of the event and they have become friendly with many of the Special Olympics Athletes that are part of the Crew.

Each year, every aspect of the event is taken into consideration so that it can be the most special for Kev & D’s Crew and the Special Olympics Athletes who participate. The most rewarding time of the day is watching the athletes experience the exhilaration of crossing the finish line.  Each athlete is passed a baton from a relay member, so they can run the last 100 meters.  As they run to the finish line, with the race organizers announcing their arrival, everyone can see the excitement and love in their faces that is from pure elation. In the past, race organizers had a special banner for the athletes to run through as they crossed the finish line. 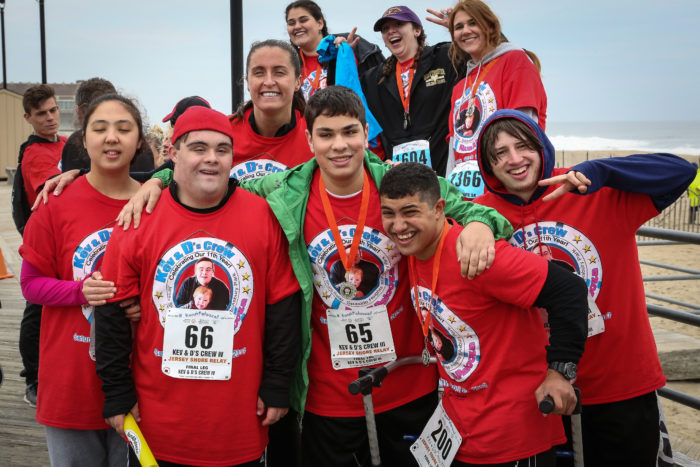 Since 2007, Kev & D’s Crew has gained unprecedented momentum and recognition, but Cheryl Donlon says that what remains to be one of most rewarding experiences is seeing how the community comes together to create a day that celebrates Kev, Dominic and everyone else who has been involved in the Crew. Even though Kev & D’s Crew was one of the top fundraisers last year at RunAPalooza, bringing in over $11,000 and are on track to raise over $10,000 this year, the most important thing is the love and support from family, lifelong friends and members of the community, many of which are members of Kev & D’s Crew.  On the morning of race day, you can find Kev and Dominic, their cousins, their friends and all extended family and friends walking and running in the 5k.  Many relay teams have been participating for over 5 years.  Some of those teams include Kevin’s older brother Christopher and his lifelong friends, Joe’s family and friends, and three teams of teachers and aides from Kevin’s high school just to name a few.  Over the past 11 years the Crew has grown and now the baton is being passed on to sons and daughters.

This widespread involvement goes to show that their influence on the community has been tremendous. Similar to the ideals held at Special Olympics New Jersey, Kev, Dominic and the Crew believe that together they can achieve something greater and leave a lasting impact.

Get More Info about RunAPalooza